Using a face made with RaceMenu on an NPC for Skyrim

This tutorial shows how to give an NPC a face you've created using Expired's RaceMenu. For using a face created only with the vanilla Skyrim sliders, check the following: Use the face of your player character for the NPC.

Using a face made with RaceMenu on an NPC 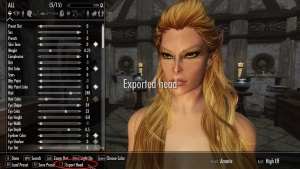 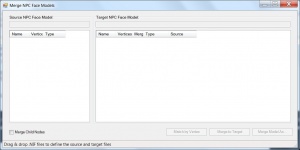 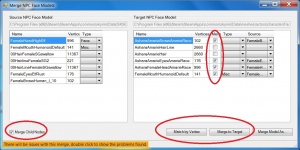 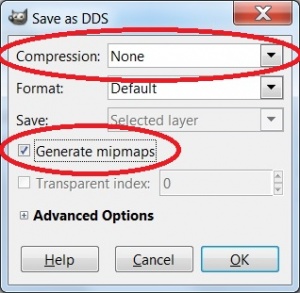 Create and export the face of the NPC

Note: If you don't see that message and you have set the shout key to a value different than the default Z try resetting the key to its default value

Use an editor like Notepad or Notepad++ to open the nif.xml file and paste those lines before the last element ends (</niftoolsxml>).

In the CK create the NPC as usual (you can follow this tutorial Adding a Follower NPC to Skyrim but don't spend too much time worring about his face as it will be overwritten by the face you have already created Just create the NPC with the same weight your character has, and give him the hair and eye textures you want.

Once you are done, press the Ctrl+F4 keys as explained here Fix the NPC face colour to create the nif and dds files for the NPC. These files are stored at the folder:

with the name of your esp file instead of MyPlugin.esp.

Overwrite the NPC's face with the one you've created

Note: If the Nif Merger doesn't launch and displays a message about a missing MSVCR100.dll, install the 32 bit version of the Visual C++ Redistributable for Visual Studio 2012 Update 4 tool, even if you have the 64 bit version already installed.

Now, if everything has gone as expected, the mesh file for the NPC has exactly the same structure than the one you've created for him using RaceMenu.

Use the texture file for the NPC

RaceMenu also exported a texture file (.dds) for the face you created in game. You can also use this file for the NPC instead of the one generated by the CK. To do this:

After doing all this, your NPC will use the face you created using RaceMenu.