Vortex, unlike other mod managers, is capable of allowing you to manage your installation of the "script extenders" for Bethesda titles.

What is a "script extender"?

A script extender is an unofficial addon created for Bethesda's Gamebryo based games. It is designed to add to or enhance the available functions and features of the game and its engine. This may include fixing important bugs, removing limitations or allowing modders to interact with the game data in new ways when designing their mods.

You are not required to use a script extender for your modding setup unless you wish to use a mod that relies on it. For games still receiving updates, script extenders (and by proxy mods using them) may cease to function in any new updates. This would mean a delay while you wait for the script extender and any dependant mods to receive an update.

It's important to note that the script extenders are neither created or endorsed by the game developers. They are created by a group of highly skilled modding enthusiasts who are under no obligation to update or add features to the script extender. Any problems with your game that occur when using this software are entirely up to the user to resolve.

Where to get script extenders

For this example, we'll be using SKSE64 v2.0.10, but similar logic will apply to other the script extenders.

First, you will need to download the archive. Even the files hosted at Nexus Mods will need to be downloaded manually.

Next, in your mods tab on Vortex, click the "Install from File" button and select the archive you've just downloaded. 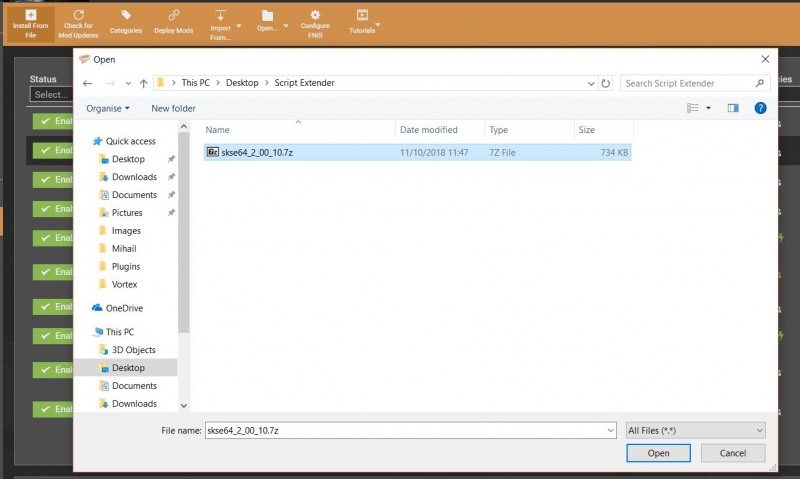 This will add a new disabled mod entry for your script extender. Leave it disabled for now as we need to make a few changes before deploying it.

Move the files into the correct directories

Generally, script extenders aren't packed in a way that would allow installing them this way, so we'll need to move the files around to make it play nice.

To do this, right-click the script extender mod and select "Open with file manager".

In the example of SKSE64, you need to create a new folder called "Data" on the top level and move the scripts folder inside it.

You should now have a Data folder (containing the scripts), 2 DLL files and an EXE file on the top level.

Now we need to tell Vortex this isn't a normal mod and should be added to the game folder, not the mods folder.

Double-clicking the mod will open the mod details pane on the right. Make the following changes:

Now you can enable this mod. If you have automatic deployment turned off, you will need to click "Deploy Mods" to all the installation into the game folder.