Vortex allows the installation and managing of ENB Binaries and their files inside the app itself.

While it is unclear what ENB actually stands for, ENB binaries are 3D graphical modifications which modify render functions in games and apply additional effects. They are used to rebalance the colour pallet of games or add effects (such as 'god rays') that are not present or possible in the original engine. In some games, ENBs can also redistribute the graphics calls from the game to more effectively use your graphics card and take the strain off your other hardware.

Where to get ENB binaries

For the purpose of this example, we will be installing ENB Binary v0.356 for Skyrim Special Edition. Similar rules apply for other ENBs.

On the mods tab of Vortex, drag and drop the ZIP folder into the drop zone at the bottom of the page. This should make the ENB file appear as "Never installed" in the mods table.

Click the "Never installed" button to install the file, but don't enable it yet.

In the Vortex mods tab, right-click the ENB mod and choose "Open in File Manager". Next, back in the Vortex mods tab double click on the ENB mod, this will open the info sidebar. The following changes should be made:

Now you can enable the mod, this will allow Vortex to deploy it to the same folder as the game EXE.

Launch your game and if the ENB data appears in the top left corner as the game starts, it's installed correctly. (Highlighted red in the image) 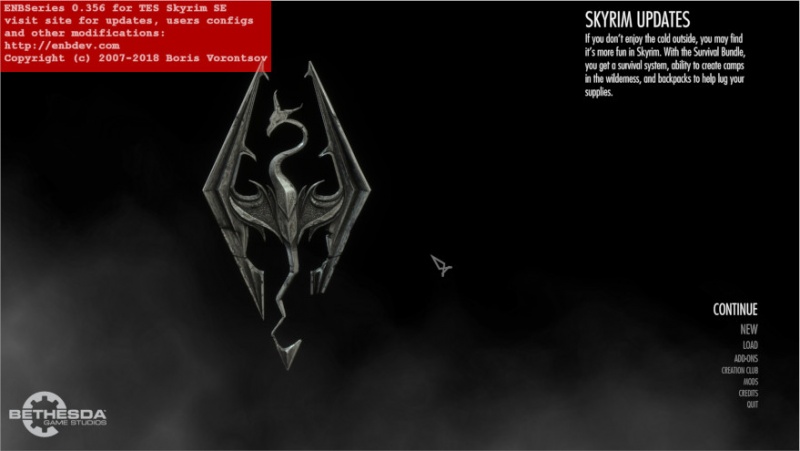 In the case of Vortex, you can actually repackage these into a single file with the game directory objects on the top level and a data folder with the data directory items inside. If you choose to do down this route, ensure you set the mod type as ENB, so the files are loaded correctly.

You may also install the two parts separately, as long as the game directory part of the ENB has its mod type set to ENB properly.