Difference between revisions of "Modding The Witcher 3 with Vortex"

Before we get started, this guide assumes that you have installed The Witcher 3 and Vortex at their default locations. You will also need to be logged in to your Nexus Mods account in Vortex. Other than that, if you are planning to use more than 3-5 mods, it is recommended to set up the Witcher 3 Script Merger.

To begin, open up Vortex and navigate to the games section. If you don’t already see Witcher 3 under the “Managed” tab, check the “Discovered” section. Use the “Manage” button on the game tile to add it to your managed games.

If you can’t see Witcher 3, you can scan for it or define it manually.

As of Vortex version 1.2.0, you can manage your Witcher 3 load order directly in Vortex via the "Load Order" tab. 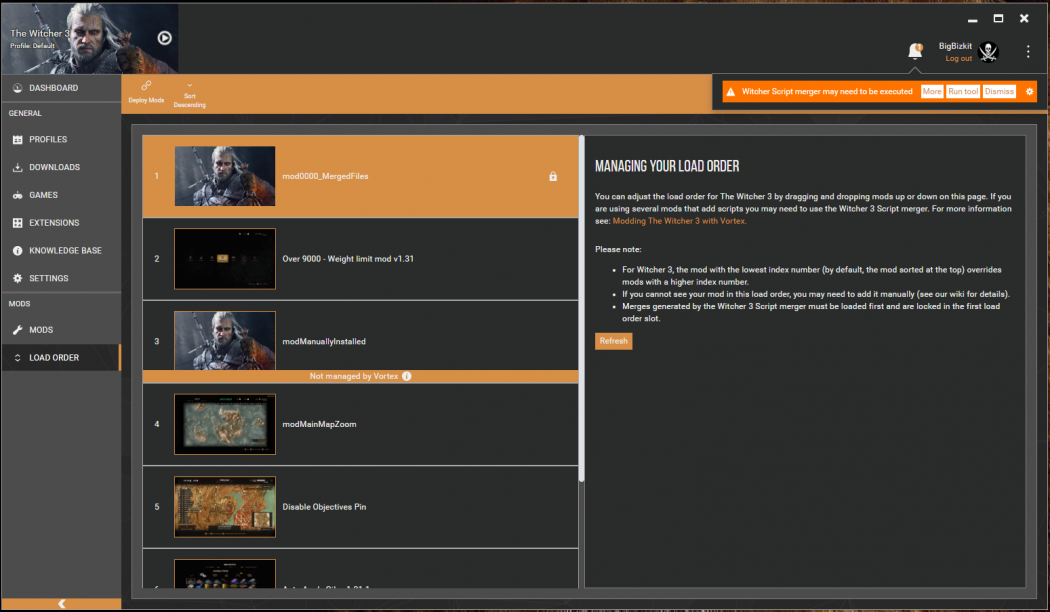 If you have previously installed mods manually by unpacking them into the Witcher 3 mods folder, Vortex (or any other mod manager) does not know about them and they will not be loaded by the game.

However, there are two simple ways to add manually installed mods so they show up in the load order tab within Vortex:

For our example, we will take a look at what your Vortex/mods setup would look like if you had two mods. One installed with Vortex, and one installed manually (by dropping the contents of an archive into the Witcher 3 mods folder).

The above is what the contents of your mods folder would be. However, since only one of these mods is installed with Vortex, only that one would show up in the mod list in Vortex: 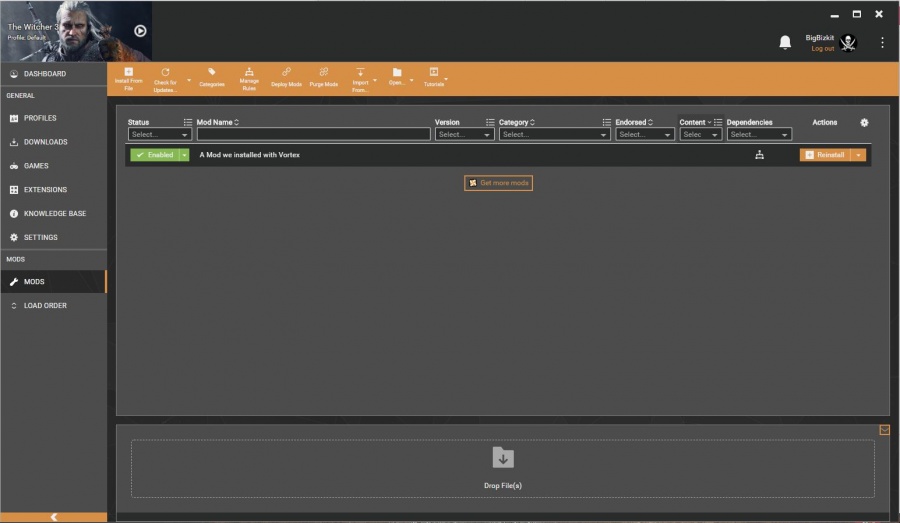 Likewise, only this one mod would show up in the "Load Order" tab: 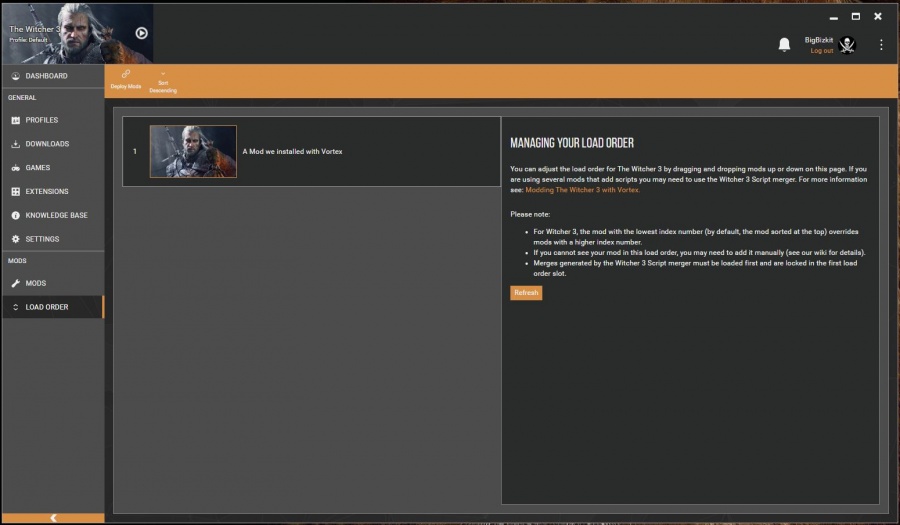 The mod we had installed manually "modManuallyAddedExample" needs to be added to the "mod.settings" file which is a file that can be found in C:\Users\YourUsername\Documents\The Witcher 3:

Open that file and insert the exact name of the mod you want to add as it appears in the Witcher 3 mods folder in square brackets. In our example it would look like this: 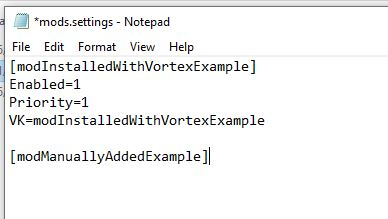 You DO NOT have to add or worry about "Enabled, Priority, or VK" - Vortex will apply those parameters automatically the next time you deploy.

Now, go back to your Vortex Load Order tab and click "Refresh" as shown in the image: 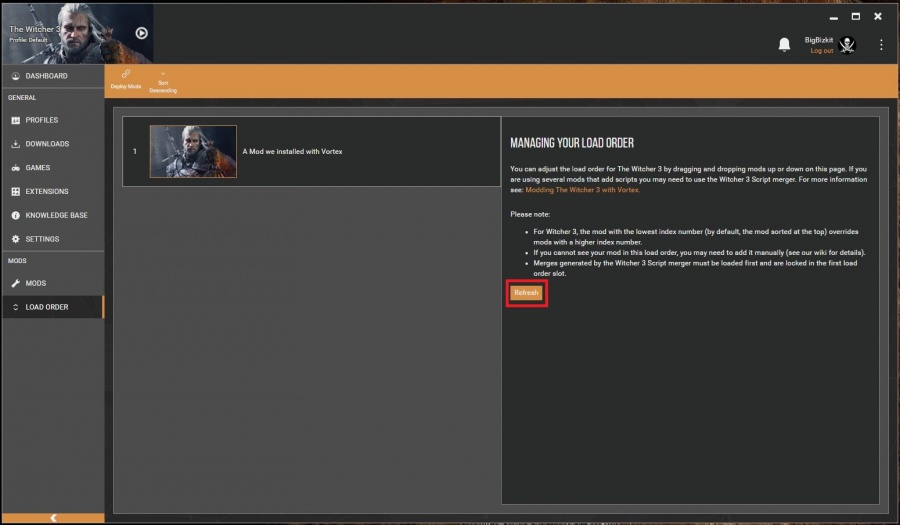 This should bring up the recently added mod: 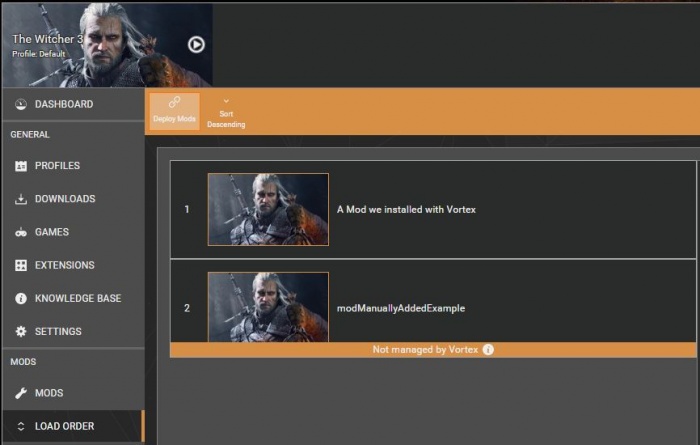 Make sure to hit the "Deploy Mods" button once you are done so Vortex can update the mod.settings file to add the needed parameters.

Optional: You can double-check that everything went smoothly by checking your mod.settings file again (after refreshing and deploying). It should have added the Enabled, Priority, and VK parameters for the mod we just added: 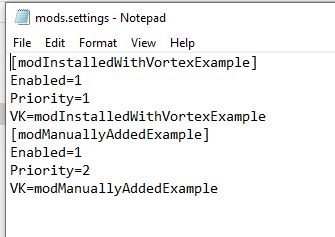 The other option is to simply zip up the mod/mods you have installed manually and install them again via Vortex.

The mod will now be added and can be installed with Vortex: 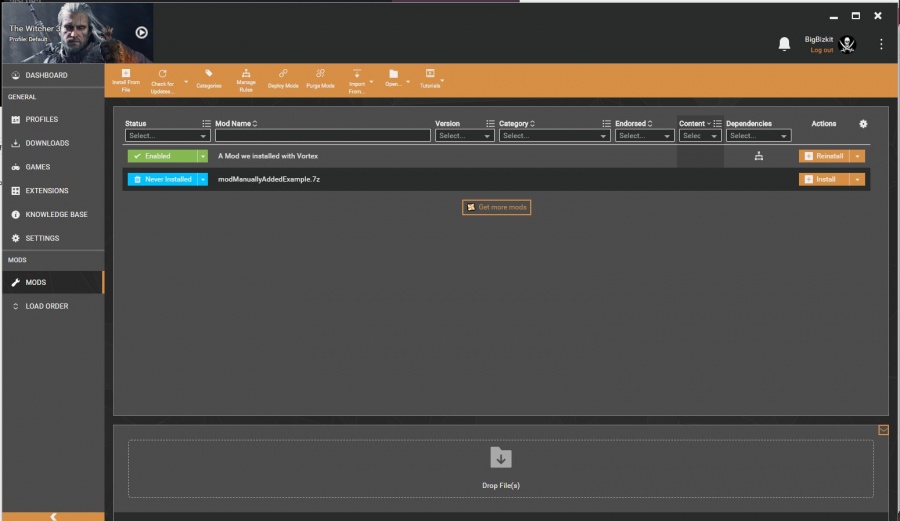 For older versions of Vortex

IMPORTANT NOTICE: Managing your load order is only supported in Vortex 1.2.0 and above. If you are using an older version of Vortex, please update as you are missing out on the most powerful features of the Witcher 3 game extension.

My mod does not work/is not recognised by the game. Why is that?

If your mod is seemingly ignored by the game, make sure it actually shows up in your load order. A mod that does not show in the load order tab in Vortex will not be loaded by the game. Make sure it is actually installed and enabled. If it is a mod that you have installed manually, you will need to add it to the mod.settings file or reinstall it via Vortex (see above). Don't forget to hit "Refresh" on the Load Order tab in Vortex, and deploy your changes thereafter.

How do I remove a manually added mod?

If you have manually added a mod to the mod.settings file, you will need to delete its entry there to remove it from your game. Changing "Enabled=1" to "Enabled=0" will not disable the mod. To properly remove/disable a manually added mod, navigate to your mod.settings file typicall found in "C:\Users\YourUsername\Documents\The Witcher 3". Find the mod you want to remove/disable and delete the entry between brackets for example "[modManuallyInstalledExample]". Go back to Vortex and hit "Refresh" in the Load Order tab. The mod should now disappear from the load order. Don't forget to deploy your changes to ensure the leftover entries in the mod.settings file are removed by Vortex.

No deployment option is available. Why is that?

This typically affects users who 1) were using hardlink deployment and 2) do not have system permission to use symlink deployment. As of 1.2.15, we have added support for mods that add menus. Because these mods require Vortex to deploy files to the My Documents folder, this means in order to continue using hardlinks the game, the mod staging folder, and the My Documents folder would need to be on the same drive. If this is not the case, Vortex will need to switch to symlink deployment. While this is fine for the vast majority of users, some users might not have the correct system permissions to create symlinks and thus use symlink deployment. To fix this, please ensure that your Windows user account has the appropriate permissions for symbolic link creation to become available.