Note: Importing Mods from NMM - applies to Vortex 1.0.0 and later.

Vortex gives you the ability to import your mod archives from an existing Nexus Mod Manager installation. To do so, switch to the mods view (side panel > Mods), click on "Import From..." and select "Import from NMM". 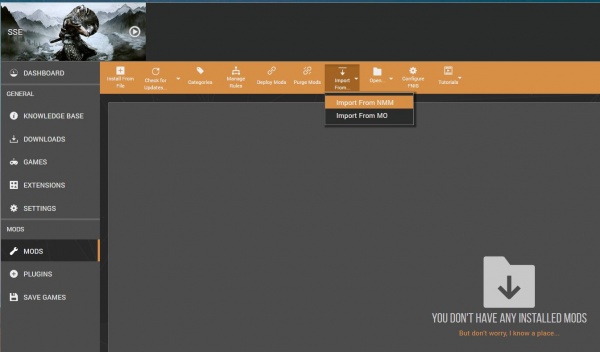 The import process is broken down into several steps. The first step will allow you to pick the NMM installation you want to import mod archives from - in case you have more than one instance of NMM installed.   Please make note of the information provided on this step informing you of the limits of the import process. Most notably, this import tool will only import mod archives. Once imported, you will have the choice to install the mods anew, or leave them uninstalled for now (if you want to install the mods at a later point in time instead). Note: you will have to go through any mod installers again and select the options you want and Vortex will reorder your plugin load order automatically.

Once you are ready to proceed, click "Next" in the bottom right. Vortex will now look up the mod archives by scanning NMM's cache information. Depending on the amount of mod archives you have, this might take a few seconds.

Vortex will now display a list of all the mod archives it has found. You can choose to import/don't import individual archives via the toggle on the left. Notice in the bottom left it will show you the required disk space. Make sure that enough space is available in order to be able to start the import process (bottom right button).

If one or several mods are currently installed via NMM, Vortex will now prompt you to launch NMM and disable the mods as shown in the animation. Once you have done that, close NMM and click "Check again".

If NMM is still running, Vortex will prompt you to close it before you are able to proceed. Once you have closed it, click "Check again".

Once the archives have been copied over, the import process is done. You can view a migration log for detailed information.

You can now decide whether you would like to install the mods from the imported archives by toggling "Install imported mods" on or off. Note that, if toggled on, Vortex will install every imported mod archive one after another which may require you to go through several mod installers. If you would like to install the mods one by one at a later time instead, leave the button toggled off.

...and that's it! Your mod archives should be imported now and be ready to be installed. If you have chosen to install them all right after the import, depending on the amount of mods installed, it is likely that you will now have to address one or several file conflicts. This is completely expected and no reason to panic at all. Check out our knowledge base for further information on how to resolve these conflicts: