All dialogs are created in Skald and stored in several DB tables.

Dialogs do not only hold the dialog texts and dialog structure, but also provide crucial means for scripting. They are, in fact, one of the 3 main places for content scripting along with (Quest) Flow Graph and MBT Trees.

Skald provides a human readable look at dialogs which slightly obscures the actual data structure. Skald provides the chapter-subchapter systems for purely organizational purposes. All dialogs are equal, and could theoretically be moved to another subchapter(=quest) without affecting the game in any way.

What happens when you initiate a dialog via Talk action 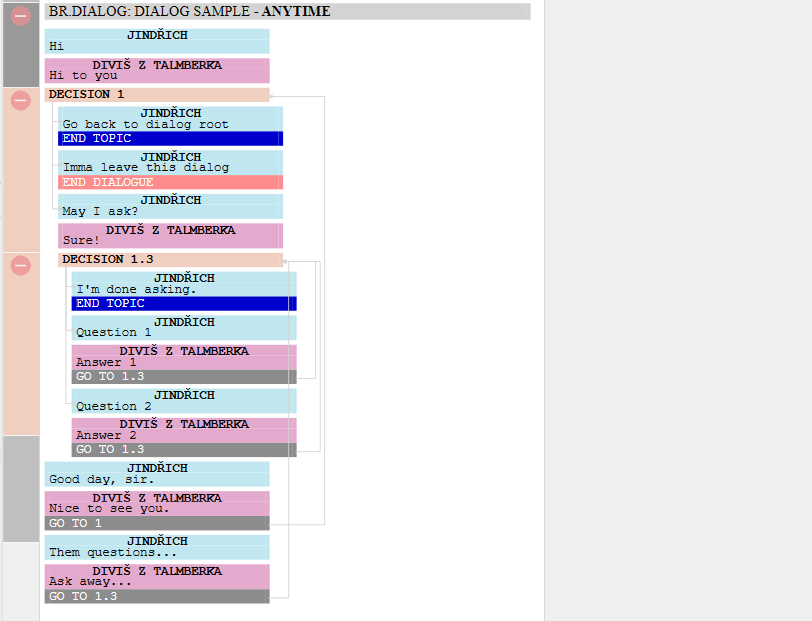 Each response (line of dialog) must belong to a role (see more in souls, roles...). A dialog may contain any number of roles. Roles are reusable across all dialogs, and are then ascribed to any number of souls, and subsequently a character and a voice. A soul can potentially engage in any dialog where their roles appear.

One role makes a monolog, 3 roles make a trialog, and so on. This particular dialog contains 2 roles which makes it a true dialog. The role JINDŘICH represents HENRY, the player character.

There is no technical difference between monologs, dialogs, trialogs, quadrialogs etc. They however do differ in their usage.

A temporary Dialog Context array, with references to the participant entities, is created when the dialog starts. The participants are written in the array in the following order: [0] initiator, [1] first other appearing role, [2] second... etc.

Monologs - utilize a more lightweight part of the dialog system (it skips some checks and synchronizations), which makes them faster but also somewhat limited. One of the downsides is that a monolog is not guaranteed to be played in their entirety and you SHOULD NEVER expect them to execute any critical logic.

Dialogs are further divided into forced and normal.

Normal dialogs – are initiated by using the Talk action on the NPC and are the only safe dialogs. The Talk action is shown only if the soul has ANY valid dialog. A normal dialog should never start with the NPC speaking, unless you know what you are doing.

Polylog (Trialogs and up) – cannot be initiated by the Talk action; must be forced by an NPCs. Since automatic dialog cameras don’t work properly in trialogs (and up), they require hand-made custom camera and pre-determined positions for every participant. That, just like forced dialogs, requires a fader sequence prior to start, if only to hide the forced positioning. Dangerous trick: You can initiate a trialog via Talk action by enabling fake empty dialog(s), which immediately end but turn on a fader screen, which you use for trialog preparation, which then use one NPC to force the trialog. 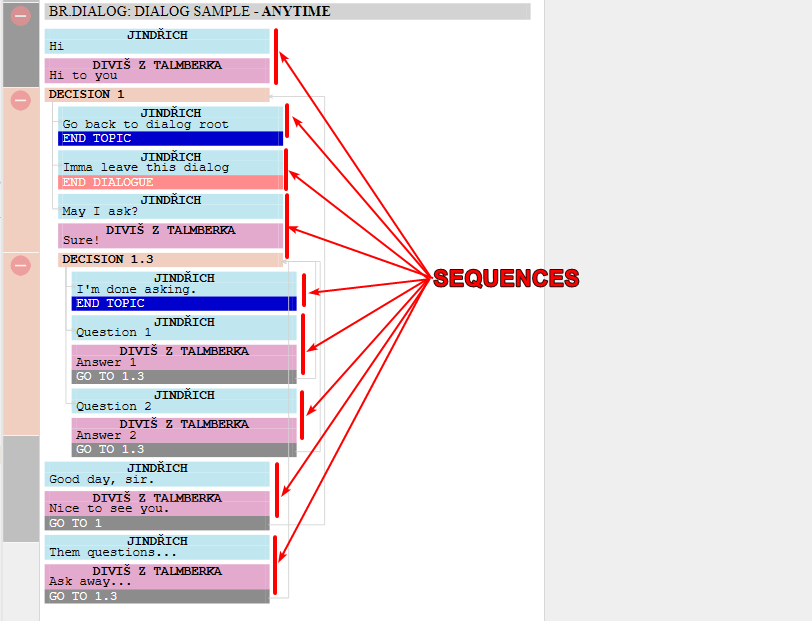 There are, in total, 15 responses (dialog lines). However the smallest logical unit of a dialog is a sequence. A dialog sequence is any uninterrupted sequence of responses (from start to END or from start to a DECISION). Entry conditions (validity conditions) are applied to sequences. An exit script or an objective actions can only be executed at the end of a sequence. Tip: If you need to run a script in the middle of a sequence, simply split it in two by adding a so-called fake DECISION, a decision which offers only one option and thus doesn’t pause the dialog.

This also means that you CANNOT resume a sequence in the middle. If a long monolog/dialog sequence is being played, and the script guarantees the dialog must finish, even of you save and load, the dialog, or at least the sequence, will start over after loading.

There are no decisions in the DB dialog data model. Instead there are the following tables: topic, topic2sequence, and sequence. All sequences below the same “decision” have the same topic ID. A forced dialog always forces a topic, never a sequence, so always have to pay extra attention to properly defining entry conditions. Sequence table holds the exit scripts and a reference to the following topic. Topic2sequence table ties sequences to topics and contains entry conditions. Topic holds a textual alias for the topic ID, topic priority, and a deciding role (if defined, it is the NPC who chooses, not the player).

In essence, the dialog system is unaware of the concepts of a chapter, a quest, a decision, and a dialog. All content of all dialogs is simply a set of topics with one or more sub-sequences where each sequence defines the following topic. If the next topic is 0, the dialog ends. Chapters, subchapters (quests), decisions, and dialogs only serve the purpose of content organization and human readability. 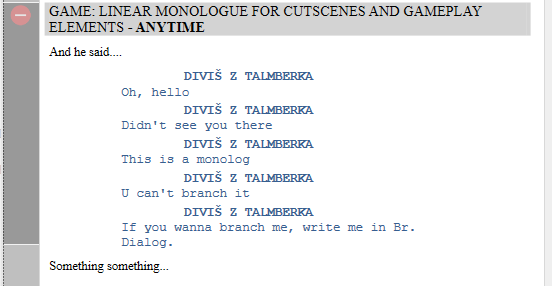 This is just an alternative limited tool used for writing simple linear monologs in-line in the cutscene and gameplay sections. It does NOT differ from its equal definition in Br. Dialog section in any way.

Decisions (merely a visual syntactic sugar, see Topics) mark a point where a sequence ends, and the dialog can continue through one or more options.

The player is provided with a dialog choice when there are at least 2 valid sub-sequences after a Decision. No matter what the roles are there. That means that, by default, even if you intended the NPC to continue one way or another, but the conditions say that both options are valid, it is the player who chooses. The only 2 ways to prevent player choice in such cases are:

A GOTO (“next” in DB table sequence) defines where the dialog continues, if the sequence doesn’t end with an END or a DECISION. GOTO 0 is equal to END TOPIC, that is jumping back to dialog root.

Each dialog, or rather the its root topic, can have a “Dialogue type”

Normal = If the dialog features 2 roles the dialog is a standard one. Dialog cameras are generated, and dialog choices are possible

Ending = the same, but a farewell

Monolog = optimization option which tell the Dialog System to not even attempt any non-monolog operations (cameras, multi-role dialog evaluations etc.)

InGame = tells the Dialog system to not start the cameras. Does not allow dialog choices.

InGame monolog = a monolog that is forced to be in-game

Beside the inherent logic created by the dialog structure itself, you can use the 3 major following means of scripting – entry conditions, exit scripts, and objective actions.

Entry conditions apply to sequences, and defines the validity of a sequence. If it’s true, the dialog is valid and thus selectable. If it’ invalid the dialog sequence cannot be played nor selected.

Empty entry condition in any other sequence is TRUE.

That means that in terms of dialogs (their root topics) all dialogs are disabled by default and must be explicitly enabled.

Exit scripts are LUA scripts executed at the end of a sequence.

executed at the end of a sequence and are synchronized (=the operations are guaranteed to be finished before the next sequence starts). You can set ANY objective from the entire game to a desired state. Objective state-transition limitation rules apply (see Quest System)

Objective action can also feature a condition under which it is applied. Same as entry conditions.

Skill checks can be considered a sort of conditioning tool. The tool is more general and simply adds a predefined icon appears next to the sequence it is set to. The only special options whic do something more are: Threaten
Persuade
Impress
Bribe

Based on the type and difficulty they fill a temporary local variable “success” with value ranging from -1 to 1 which you have to then test for in subsequent decision. The actual tests are protected via self-explanatory Expression Aliases skillCheckSuccess and skillCheckFail you are advised to use.

A sequence can have a cooldown set. Cooldown defines for how many seconds, in GameTime, is this particular sequence invalid (despite the entry condition). Cooldown = -1 is auto-disable, which disables the sequence forever after it is played for the first time.

Sequence splitting and fake decisions = adding decisions with only one option for the purpose of splitting a sequence in two or for a GOTO to be linked there.

Empty responses = a response with no dialog line

Dialog inclusion = using the exclamation operator (!) you can include a topic (by alias) from another dialog. The included dialog will play, and if ending with END TOPIC, the includer will take over and continue.

Playing around with topic priorities over multiple dialogs.

Forcing a non-root topic = dialogs are forced via topic. You force any subtopic which may start the dialog from somewhere in the middle of its structure.

Stealth dialog = Creating a hidden dialog structure by hiding it under an invalid empty sequence.

!addRole command = can create a dialog with no response form one if the participant (the added role). It looks like a monolog but is technically a dialog.