How special encounter could be made

In the Classic Fallouts, there was no "wandering the wasteland" you traveled using a world map with a grid, so while on the world map and traveling between one area to another you'd occasionally get interrupted by enemies randomly (a random encounter).

Special encounters were different though.

As Quoted From The Vault "Special encounters are random encounters, often non-canonical, and are unique compared to more common encounters which may consist of hostile NPCs. They usually serve as entertaining points of humor, though some are very dangerous (Mad Brahmins), while some grant access to unique, sometimes powerful loot (Bridge Keeper). Most of these encounters consist of humorous pop culture references or other games or even earlier Fallout games (The Cafe of Broken Dreams).

I've started this thread with the hope that we can hash out a way to making the Classic Fallout encounters (Bridge of Death, Godzilla Footprint, Tardis, Vorpal Bunny, etc.) possible, and perhaps open the possiblites of new ones in the future.

All encounters should of course be tied to the Wild Wasteland perk, so that way players can play the game with or without encounters (Which are all silly since that is what they are all supposed to be)

I came up with two possible ways (Saying this now, I'm not a modder I'm the idea guy)

Using New worldspaces (theres a mod with a blank one) and a script that activates on new exterior cells.

The details are this, the script has a chance of activating everytime you enter a new cell while your outside (so you can't walk into a building and encounter the bridge of death)

The script would up your chances of encounters by your luck skill, level should also probably be a factor so you don't get weapons and armors too early.

The script once activated, would give you a choice by using a standard message box, The box would say something like "You have encountered a group of men banging halves of coconuts together (Monty Python), Do You wish to proceed? Yes or No." Choose yes and your character is teleported to the worldspace of that encounter, does the encounter and leaves using an activator and message box. Choose no and continue on your journey until the script promts you again.

This method would ensure no space is used that could conflict with other mods. And makes the encounters truely random, as there would be no specific cell to go to, to force the encounter. Of course their would need to be certain cells that activate the script so you don't encounter things in towns or while fighting outside.

The encounters would be done similar to upgrading houses, by having the objects always present but disabled, and a script that activates either randomly or upon something like the 4th time the courier loads that cell. Then by disabling normal area objects and enabling the encounters objects the encounter would appear. However this would make the encounter use possible conflicting space, and also would make them in one set location rather than truely random. A second script would need to activate to disable all the objects again after the courier is done with the encounter, so as to minimize conflicts possibly.

So those are hopefully how special encounters may be done, as I said before, I can't even mod a bit, not even port mods, but this is what I could come up with. I look forward to any critisim since it'd make the community one step closer to Classic Fallout type encounters.

The Bridge Of Death

The most recognized encounter is Fallout 2's Bridge of death.

EmbedVideo is missing a required parameter.

Based on Monty Python's Bridge Of Death.

Using a blank worldspace, making a canyon with a bridge. Perhaps using invisable walls so as to keep people from jumping off into the canyon.

And using the forcedialog script to make sure the player doesn't just immediately kill the bridgekeepr.

The actual bridgekeepr, would use robes like this, which would be very resistant to energy weapons. 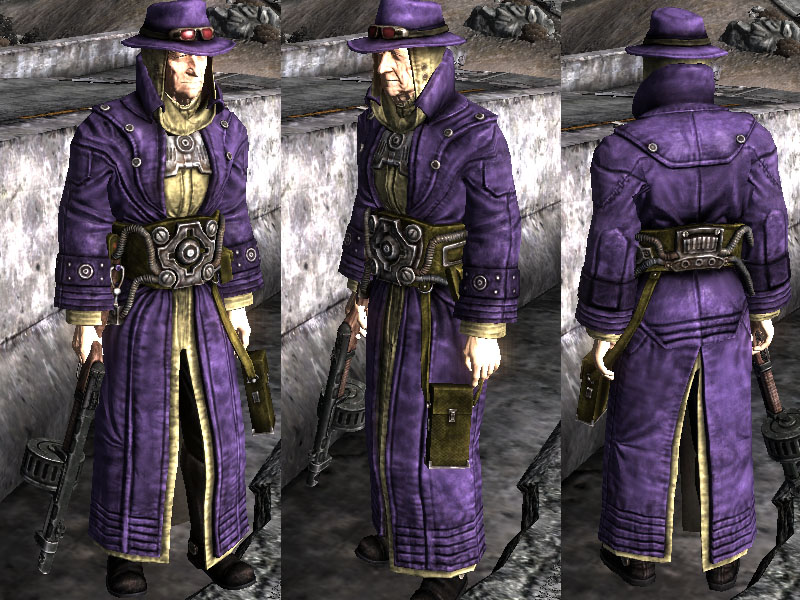 He would have a large amount of HP, but no weapon.

To voice him you can use sound clip sites.

The three questions could be.

2.What is your quest?

Answer: To find the men who shot me. (We will assume you haven't killed them yet)

Now the third one I've been a bit undecsive I'd suggest if possible, a way to make more than one possible third question, Such as What is the airspeed of an unladen swallow? (This would be voiced) Then there would be Fallout Related questions.

And on all wrong answers there would be an instant kill script (that should work even if your in god mode) just like in the original.

The second most iconic encounter (and one of the most useful, since you got dogmeat in it.) is The Cafe Of Broken Dreams, which was most likely a reference to 'Boulevard of Broken Dreams', where the movies main character sees dead people from his life.

There already is a mod in the works thats attempting to add Fallout 3 companions to New Vegas called Cafe Of Broken Dreams, I'm planning to ask the author if he'd like to be involved with making an actual Cafe. That way it'd be humorous and useful, just as it was originally.

Assuming method 1 works. The Cafe would be set in a small world space with ruined buildings (Maybe copy and Paste Boulder City and Edit it so that there is a large ruined cafe.)

The Cafe would include memorable past characters (un-aged) from previous games, such as James and the Lone wanderer just assume the default look and that the wanderer was male.

Others would include persons from Fallout 3 having drinks together who wouldn't normally, maybe Three Dog and Col. Autumn as well as discarded player models (See video at beginning, Why does it have to be a white hero? Can't a black man save the world? lmao)

If it was done well it'd most likely become a very popular mod just by it self. There are other combinations of unlikely buddies, President Eden and Elder Lyon chatting, Liberty Prime and a Behemoth (They'd have to be scaled down, and could mention that their size was all green screen or something.) Maybe the guy From Vault 77 and his puppets? =]

Edit: Also over at Underground, I started a thread hoping to recreate Cassidy (Fo2 follower, Also Cass' missing father in New Vegas) and it seems like we are making some headway so he may be in the cafe as well.. (Which would be how he is alive and why he hasn't aged since Fallout 2)

The original makers of Fallout were apparantly fans of Monty Python since there has been several references in most of the games.

1. Bridge Of Death (Mentioned Above)

And I'll post how the other two could be made right now since I'm talking about them.

The encounters would have to be in order otherwise it wouldn't make since so I'll go into how that could be done later.

The first encounter would be King Arthur's Knights (However in-game we would call it, a group of strange men in power armor. Since your supposed to get the reference in the dialog, not off the bat.)

It would be a small playing area (to fix the problem where you can see forever, I'd suggest surrounding the area with montains or large rocks to block the view of the blank world) There would be 5-7 heavily armed men in power armor and one man standing in front of everyone else. (Since in Fallout 2 you could get their armor, and that should be the case here as well, kill them if you want but no reward for it.) Again on approach you'd be forced into dialog with the one in front. His name will simply be Strange Man Some of his dialog could be voiced using the sound clips from the movie,

His first line would be voiced

This next line cannot be voiced unfortunately Do you know where we may find the Holy Hand grenade of Anitoch? (Now even though you may have the grenade you will not be able to say that you have it.)

[Puzzled, You point in a random direction and nod.]

You know much that is hidden, o Tim (I'd suggest using audcity to cut off the O Tim part of the sound clip)

And with that dialog ends, and the knights walk away and dissappear or walk out of sight, the courier then uses the exit and leaves the encounter using a scripted activator to return them to their inital location.

The second encounter would only become available to occur after the first one has been completed (Perhaps a script line such as EncounterAuthursKnights=1 then Vorpal rat encounter becomes a possible encounter.)

This encounter was actually cut from Fallout 2, it was completed but not implemented and was restored during the restoration mod for Fallout 2.

In a second encounter with King Arthur's Knights you encounter them battling a giant rat. (As a parody of this famous scene from the movie.)

EmbedVideo is missing a required parameter.

The setting would be small again, surrounded by large rocks (to block the blank worldspace view problem that occured in Fallout 3 when people made new lands) and there would be a cave in the rocks. (When I say cave, I mean a nook or small area, no need to make a secondary area.) and around the mouth of the cave would be tons of skeletons and human gore.

The knights would be busy battling the vorpal rat with very high advanced in-game weapons, the weapons and armor should still be unattainable. (None of the characters would appear hostile to you. So you don't get murdered)

I'd suggest a very high damage on the rat so that if a player tries to kill the rat with normal weapons, they will be killed instantly. Then somehow make the knights and rat either essintial (and script a death for them) or have godly amounts of health so no one dies too early.

Inside the cave should be a holy hand grenade (This grenade should have a different item ID than the original HHG's, also the link is to a more holy grenade look.). It could be scripted to forceEquip on you when you pick it up. And when thrown should use a large nuke explosion effect (in case you suck at throwing and miss it can stll be reasonable that it kills the rat anyways), but (if possible) be scripted to only cause the rat to die, and not cause the knights to become hostile and kill you and your followers.

You could include dialog with the Knights afterwards, but as there was none in the original encounter I have no idea what to suggest, perhaps a custom sword called Excaliber that does moderate damage. (Could just be a machete and he'll call it a sword. He bangs coconuts together, for goodness' sake)

After all that is over the courier uses the scripted activator and leaves the encounter as usual.