Players who enjoy taking screenshots in Fallout3 make use of them all the time and the imageshare wouldn't be as nice as it is without them. Basically, custom poses are essential for "presenting" Fallout in a different way than what everyone can see ingame. I've been wondering why there are many modders out there who are proficient with 3D-software but only a few (but excellent) pose mods. So I started looking into that "process" of creating a pose myself and decided to write a little tutorial if I'm successful.

The latest versions, and some basic knowledge (camera movement, etc), of these tools:

My base was Backsteppo's tutorial and his FO3-ready skeleton in .blend-format.You might want to grab that file since the example in this tutorial will be made using this.

Open the skeleton file and adjust the workspace to your liking. I tend to work most of the time with one panel only, without checking the others very much, so I made it bigger and changed the perspective mode (NUM 5).

For the tutorial I decided to make a rather easy pose, no highly complicated finger positions, straight spine, etc. The "Objection!"-pose from Phoenix Wright seems to be perfect.

So now that we got an idea or "concept", it's best to get some reference pictures, obvious choice: Google. 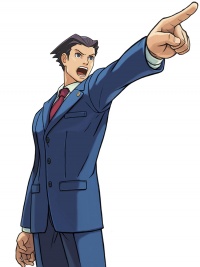 The posing itself is done only via rotating, you don't want to grab and move bones, that deforms the mesh. Rotating on the local axis makes it look more natural, so the keyboard shortcuts we'll be using most of the time are:

Let's start with the right arm, select the UpperArm.R bone (RMB) and rotate it on the local X-axis. Apply the changes (LMB). (By clicking the RMB you can cancel the action)

After some more tweaking via trial&error (upperarm Z,X, forearm X, ...) and altering the hand the arm looks more loose. (might wanna take your own arm as a reference, too.)

Now the stretched left arm. Judging from the reference picture the arm is on line with the shoulders, so we raise it. But not fully horizontal because, as you will notice, this looks pretty awkward. Try it with your own arm and you'll know why. So instead we also lift the shoulder until it looks good.

The next pictures should be self-explanatory: 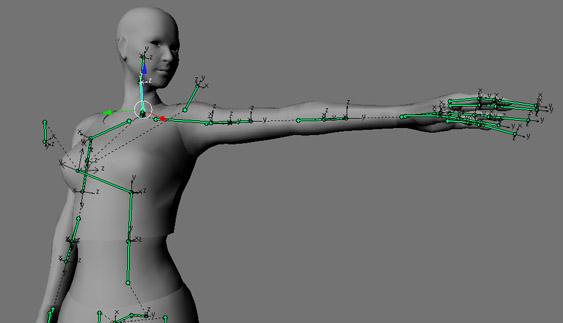 The basic pose is somewhat finished, let's touch it up. I bent the spine slightly backwards (Spine and Spine2 Z), straightened the legs (calf Z, thigh Z), raised the shoulder a little more (clavicle X), and gave the clavicle some Z-rotation.

So that's my take on that reference. 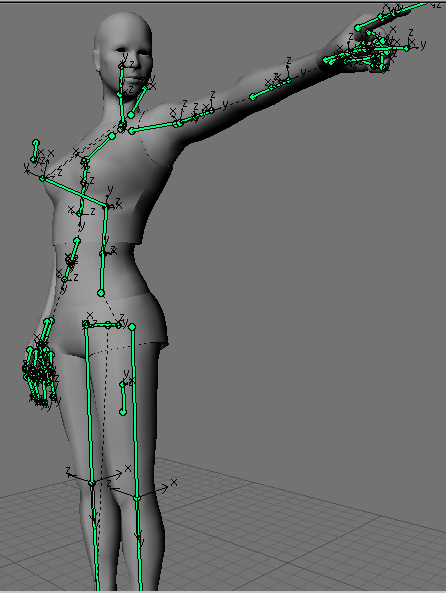 In order to make (fast) changes to the pose later on it's easiest to save it in .blend format. To do so it's not sufficient to simply save the file now, the skeleton would be in T-Pose again. Hit A to select all bones and then either use I or Space -> Object -> Insert Keyframe. Choose LocRot

Now you can save your pose as .blend.

[If you skipped step 5, you have to insert a keyframe now.]

Now you have to use tazpn's kfupdater to "finalize" the .kf. Unzip the archive to a folder and move your exported pose-.kf to the same folder. It's a command line app, so open your cmd.exe and navigate to your folder.

All those options and modifiers seem to be a bit complicated at first (at least for me...) but the values for the example do the job as well. So copy and paste the FO3 example from the ReadMe

and replace the input file with your pose and the output with the filename you want the final pose to have. (e.g. a prefix for all your poses + a descriptive name.)

There should be two .kf-files now in the folder, the new and the old one.

Next step is tweaking the almost final file with NifSkope: Making it a SpecialIdle and, because it's a pose, loop it.

The .kf is done, let's get it ingame.

Move your file to your Data\Meshes\characters\_male\IdleAnims\... directory, the GECK needs to find it.

Open the GECK, load the Fallout3.esm and select Gameplay → Idle Animations... at the top. Either select Insert Child for the top-entry or Insert Sibling for one of the others. 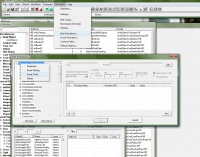 This is the branch where you can organize all your custom animations/poses. So let's add the first child for that entry, our "Objection!". But bear in mind that the ID you choose will be the ID you will use ingame to call the animation. If you can remember each and every name then that's no problem, however I recommend using the prefix you chose and simple numbering. (Like that it will also be easier for others to use the poses in case you want to release them)

We could save our .esp now and the pose would be ingame. But there's a catch, each and every NPC would use that pose as an idle. Since we don't want that we have to add a condition which allows the player to trigger the animation when he wants to.

Because it's a pose which shouldn't affect gameplay at all, we create a condition that will never be true, we add a new, empty faction and the corresponding condition.

Save your new .esp!

Congrats, now you should have a working pose ingame, ready to be triggered =)