Now, that you got a basic quest with some static content this trial will focus on adding some communities (actors) to make things more lively.

In a nutshell: communities define schedules for npc actors. Those schedules can be timed, e.g. different actions in different locations at specific times.

The associated actor will automatically follow the schedule based on the current time and move to the next location and “perform” the action. The time is merely the trigger to change to the next action so the actual duration of the walking to the next point has to be accounted for.

A community is setup as a set of phases and every phase defines multiple actors (and some of their properties, e.g. appearance for this phase). A phase can represent some state of the community, e.g. a “normal” workday schedule. Another phase may be a “lazy-day” schedule. Only one phase for a community can be active at the same time.

Phases are also useful to change specific communities depending on world state changes. Without phases you can only setup static time based routines for communities but if something happens, e.g. based on a dialog choice of the player you can set a new community phase according to the choices. That is not possible with a timetable.

An action of a community actor is defined by selecting an actionpoint which defines possible sequences of some predefined animations and placing it in a specific location.

Radish Quest UI has three main modes: layer mode for editing layers, community mode for working with communities and an additional navigation mesh mode for creating new navmeshes for NPCs (which works only for new hubs and will be covered in a later trial). 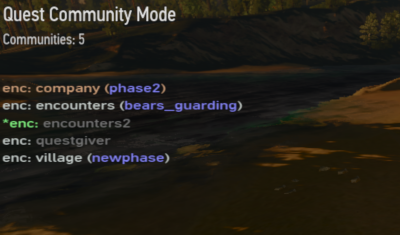 Communities cannot be edited or created in radui. They are read-only (indicated by the orange color of the community name and phase, see above) and it’s only possible to visualize and test encoded communities and their phases.

The community mode enables the spawning and despawning of encoded phases. This means you can preview communities in radui exactly like they would appear in the quest if this phase was triggered. However you have to make sure the layer containing the actionpoints referenced by the actors in this phase is also visible - or the community actors will not spawn at all or behave differently as they cannot find the actionpoint they are assigned to.

Actionpoints can be defined (placed and the action animation previewed) in the layer mode of radish quest ui. 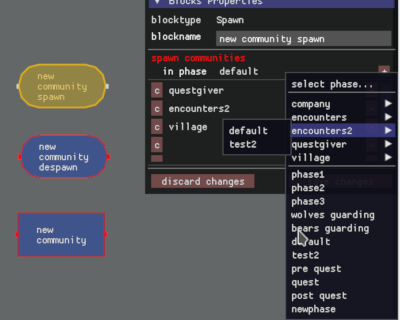 Communities can only be defined manually directly in yml files. However the questeditor can parse the definitions and will offer only the defined communities and phases in appropriate community blocks.