Allright, we have a problem. Too many objects that are in the level are making the game load horribly long. The memory imprint is significant as well and of course rendering that many objects takes a lot of CPU and GPU time. But we don't want to downgrade the game for PC (much) since we already shown the world how beautifull it is.

We can use two tools to alleviate the problems while avoiding severe uglyfication:

We came to an agreement with programmers on some principles of use. First of all we need some extra layers. It's unfortunate, but still possibly the best option. There will be one new child layer for almost every art layer currently present in the level and some objects from that layer will be moved there.

The "pc" layers is additive, so you cannot replace objects for consoles with different objects on PC. 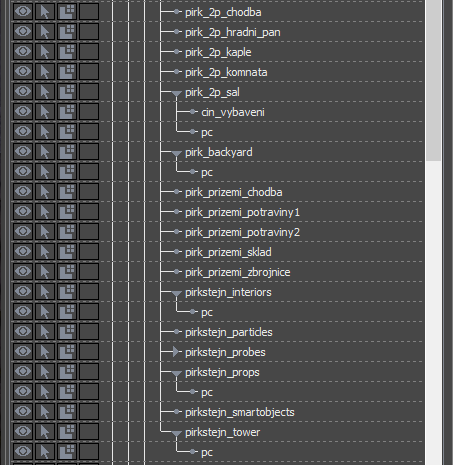 How to do it

Base layers' settings will look like this (this is default and doesn't have to be changed):

while "pc" child layer will be set this way:

To set MinSpec for the objects in pc layer, just select them and change the MinSpec rollout under custom material slot in Rollout pannel to what you want:

After you set the new pc layer, I'd suggest to hide it and start moving objects that doesn't look crucial to it. Gradually your scene will turn into a console version :) Then, you can unhide the pc layer, switch editor to Medium Specs and start changing the MinSpecs on objects to "High". Again the objects will be dissappearing immediatelly.