An example of a larger MBT tree

MBT trees are the basis of AI scripting. Each Smart entity can have a brain which can execute these trees. Each entity holds its own instance of the brain with its unique state.

Trees are composed of nodes and edges. A node represents a singular action (place item), or a function (calculate something), or logic flow control utility (loop 5 times, ifElse condition). Edges are the lines which define relationships between nodes. MBTs follow a strictly hierarchical tree structure.

Implementation of trees are saved in XML files under ../Libs/AI.

Each tree can use any number of variables. The variables are used for storing data and setting up parameters of the nodes.

With the (only?) exception of mailbox creation editor window all tools provide type name autocomplete via Tab key or Ctrl+Tab combination.

You can use any standard variables (includes basic CryEngine variables) or create a compound custom types.

(liste are only the relevant types)

Custom types are defined in ..\Data\Libs\AI\TypeDefinitions.xml

Warning: Only one mode can modify this file at a time. Otherwise you will have to merge the changes on your own.

They are compound types akin to C’s struct. A type can have any number of members. Each member must be a standard variable type or other compound type.

A type can have any number of subtypes. Subtype is then referred to as type:subtype

Just like the other variables enums are also either standard or custom defined in TypeDefitions.xml.

Each tree has its own scope, therefore if a tree includes another tree which includes another, there are several nested scopes as a result. Variables are accessible from the tree that declares them and from any included tree. Exception to this rule is a situation where more nested trees declare the same variable. In that case the included tree can access only its own variable.

There are also some globally accessible variables created by code (Example: _player which holds the reference to player WUID).

Some, typically short-lived, variables are also created by code dynamically during runtime. (Example: __from and __to temporarily hold info about current parent and child object names during execution of GraphSearch node)

Brains can have several subbrains and/or behaviors. In that case brain variables are global in terms of the brain – they are accessible from any tree that runs on this brain. 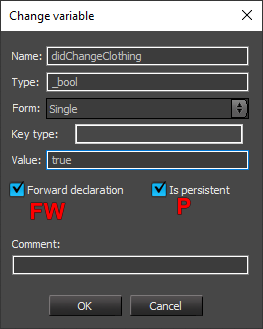 Forward Declaration (FW)
A variable can also be forward-declared. That tells the AI engine that when this tree is started it expects the variable of this type and name to already exist in the parent tree. If the variable does not exist it results in runtime error.

Persistent variable value is saved in save file. Normal variables are not stored on game save.

__varName = a predefined variable that is created by the code. They may be local, temporary local, or static global.

All MBT trees consist of node connected by edges. While nodes define an operation or flow control, edges define the order in which the nodes are executed.

All nodes go through basic sequence of states (None -> Running -> Success/Fail) and can enter several more additional states (Halt, Suspend) when an interruption occurs. In run-time (and in AI replays) the nodes are colored according to their states. You can also add breakpoints to specific states of a node (right-click on the node header).

Red also often signalizes a node (or, in this case, a whole subtree) which was killed mid-execution by some higher-order logic. These fails are only propagated as far as the node which caused this subtree to be killed and don’t cause the fail to be propagate higher (see more in Flow Control).
An example: Two subtrees are executed in parallel (Parallel node with 2 childs). The Parallel node is set to end (succeeds) if Any child succeeds, ‘Child 0’ is some eternal loop (e.g. “move in circles”). ‘Child 1’ waits for a signal (e.g. a message) and then instantly succeeds. When that happens all currently executed nodes in Child 0 fail BUT the Parallel node succeeds and a SUCCESS is propagated to the parent node of the Parallel node.

None = a node was not executed at all or it was executed and its final state was propagated further. A grey node which was executed can be told apart by yellow edge leading to it.

The rightmost sequence was executed, or attempted, twice. This tree section is not currently being executed. Note: You cannot know, from this image only, if the node failed or succeeded.


Running = a node is initialized and its validity is evaluated. If the evaluation fails it results in error and node failure. If evaluation passes the node’s function is executed. Some nodes can go through several internal updates (you can add breakpoints to these). Some nodes are executed instantly (math operation), some may remain in execution for a longer time period (Move, which tells NPC to reach a point). 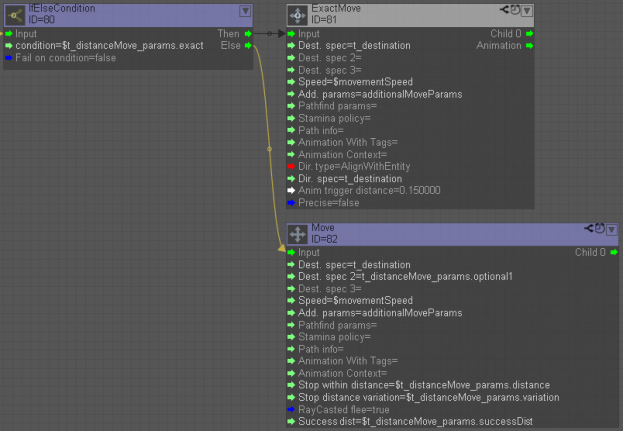 The Move node is currently being executed. The NPC is trying to reach the destination stored in variable t_destination. The IfElseCondition node is also being executed as it waits for the result of its subtree (the Move node in this case). Depending on the result the IfElse node will propagate fail or success state to its parent node.

Nodes SetQuest and AddLink already succeeded. Execution is currently paused on InstantSendMessage node due to breakpoint (indicated by the red dot by the Input port). The IfCondition and Sequence nodes are in execution as they wat for the success/fail result in their respective subtrees.

Fail/Error = the node is invalid and produced an error or purposefully produced a fail (see Flow Control). An error usually comes with some console message but internally it only produces a fail and is thus indistinguishable from a purposeful node failure. 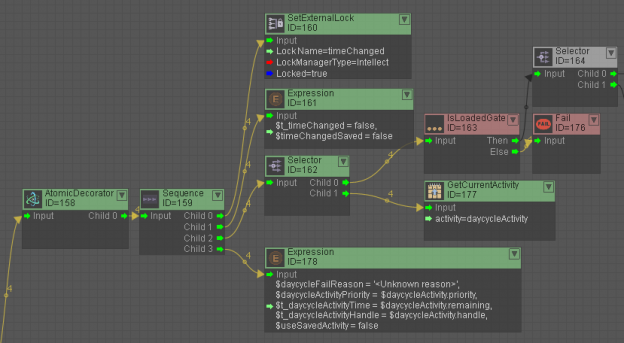 This subtree created a fail state on purpose (see more in Flow Control). The fail was propagated to the Selector node which is designed to work this way: If a fail happens in its subtree it attempts to execute the next subtree.

This section is not an extensive list of all or most nodes. It provides basic examples and aim to explain the core principles of tree scripting.

Timed nodes are nodes which don’t get executed instantly but rather take more time or are executed continually. All of these nodes are indicated by the clock icon in the node header.

Wait node is a typical example. It waits for the specified time duration and then succeeds. -1, in this case causes eternal Wait. This is typically used to “put a subtree to sleep” and a waiting Wait node takes next to no toll on the performance

Timed nodes cannot be used under Atomic context. That would result in a runtime error.

Some timed nodes also have their instant counterparts (the word Instant is in the name) which allows to use the same or limited version of the same node in the atomic context. Example:

Atomic context ensures that the whole set of nodes under said atomic context, act similarly to a single node. That is, all of them or none must be executed no matter what.

Atomic context is used for:

As a result, any atomic context can contain only non-timed nodes.

Warning: Nothing prevents from creating an infinite loop in atomic context. That would result in a globally stalled AI. Nothing prevents you from creating a logic that takes too long to execute under the atomic context. That might result in weird AI behavior where, for example, a save is created several seconds after request and the AI stalls for a short period of time. The save may also get rejected due to timeout.

Atomic context is settable in some nodes as their parameter.

Or it can be added in-line by using AtomicDecorator node.

Warning: Although it seems that everything will be atomically executed when the Semaphore opens its subtree a save can be created during the micro-window presented by the “dangerous gap” between the Semaphore opening and AtomicDecorator initialization. It such cases tree script must support proper reconstruction of the Semaphore after loading the save.

Nodes of the type Gate (sometimes caller barrier) wait until the condition is met. Then they open their child tree.

Decorators apply their effects as long as their child is in execution. Examples:

All nodes which result in some animation have one thing in common - the animation continues even if the node already succeeded. The animation may continue until forceful stop, or if another animation is played (PlayAnimation interrupts walking)

Link systems is one of the critical parts of scripting. Please read more in the in the system’s documentation

The AI system automatically attempts to turn an NPC entity into a low-profile (LOD) mode when the entity is far from the player. This allows optimization. The other mode is called “Detail”. You can define what sort of light-weight logic the entity executes when it’s switched into LOD mode. An NPC CANNOT attempt to execute PlayAnimation when it’s in the LOD mode – this would result in error. Therefore, all PlayAnimation nodes most be, in some way, protected by a LOD node.

The goal of the tree scripting is to execute nodes in the right order and control that order as effectively as possible. Edges define which node is followed by another but are only applicable if there is a child port in the parent node. Most “operational” nodes (that is nodes which execute some function) do not feature a child out-port and thus cannot have a subtree or sub node. Standard programs like C are implicitly sequential (one line of code is executed after another) and provide a set of statements (if-else, while, switch etc.) to help you alter this primitive linear execution. The MBT trees lack these statements by necessity and instead provide you with a set of nodes (unofficially called Flow Control nodes) which typically do not execute any procedure but instead define how their subtrees are executed. They also propagate or react to fail/success states. They can produce their own successes and fails.