Before you can execute any function, the tool requires:

The purpose of Storm is to support and execute vast but easily manageable set of rules which setup various game-critical data on NPC souls. That is roles, schedules, stats, characters etc. 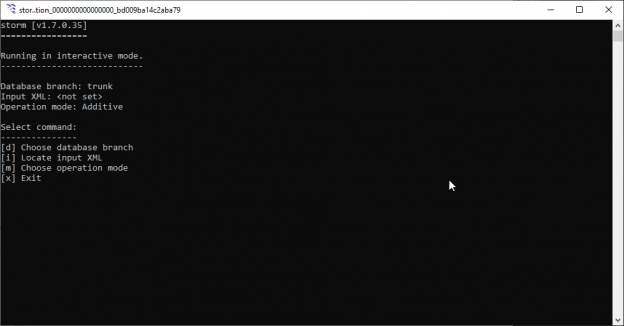 Pressing the key indicated in the [square brackets] execute the listed function.

Beware of overwrites! Files and rules are interpreted and executed in the order listed in the definition files. If any two rules affect the same property the last rule overwrites the previous one.

You can switch between additive and generative mode.

Additive mode – only adds new entries in to the DB. Is faster but is incapable for deleting entries.

By pressing [i] you can find the path to the input XML. This is a mandatory setting and the tool remembers it.

XML input file does not contain any rules. It is a simple XML file which contains paths to all other files that contain the actual rules. The file structure must be as follows:

You can create custom classes but you should have the need. Standard task groups (classes) are:

If you specified the DB branch and Input XML, Storm allows you to perform any singular task. 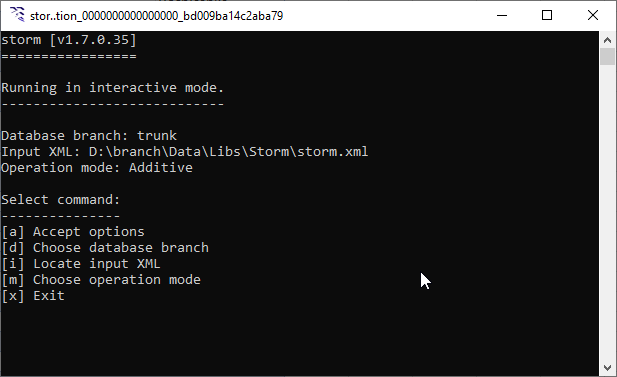 Storm will check consistency of all storm files and DB tables. 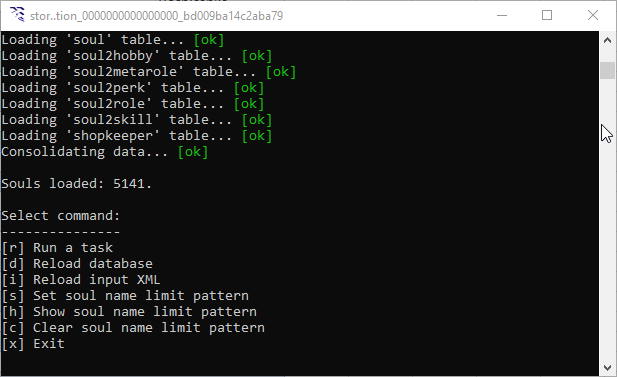 This usage is reserved for testing purposes when you need to make some quick changes.

Storm is also used by the data builder. This execution runs all the tasks in generative mode will overwrite anything you have changed manually in DB or by using Storm as described above.

A rule-file is a simple XML file which contains rules that you want to apply. A rule-file will be executed when it’s properly included in the Input XML file.

A rules-file can contain any number of rules.

A rule consist of two parts – soul selection, and operations.

Selection utilizes selectors. Selectors are a set of constraints which select the proper set of souls to be affected. Selection section can hold any number of selectors (the default operation is AND and is implicit).

Operations section can hold any number of operations which are applied to the selected souls one by another.

The basic rule-file structure must be as follows:

hasLocation
<hasLocation name="location_Sazava" />
TRUE for souls belonging to a faction which is linked to the specified location.

hasNameNumberModulo
<hasNameNumberModulo divisor="3"  result="1" />
Soul names of more generic NPCs are usually numbered – bandit1, bandit2 etc. This selector takes that number, applies modulo, and if the result of this operation matches the specified result value, the soul is selected. Good for selecting every other NPC from a name-group.

hasRandomValue
<hasRandomValue min="0.2" max="0.5"  />
Each soul is dynamically assigned a random value. TRUE for souls which happen to have the value within specified boundaries.

hasShop
<hasShop />
TRUE for souls with a shop. This is specified in DB table “shopkeeper”

You take any number of selectors and combine them using logical operations – AND, OR, XOR, NOT

Selects all souls which have a shop OR are males but do NOT have the role HENRY.

You can simplify repeated usage by defining a new custom selector and specifying its name.

You can then use this custom selector in any rule.

TRUE for any soul whose name begins with prefix tal_, mrh_, or sam_.

TRUE for any soul who is a male and has a shop.

Custom operations can be defined similarly to custom selectors.

Adds a set of roles required for the NPC to be bribe-able.


autolearnPerks
<autolearnPerks reliability="1" />
Add all perks to the soul which have the flag “autolearnable” set in DB for which the soul has high enough skill/stat requirements.

setGenericCharacterNamePattern
<setGenericCharacterNamePattern pattern="GENERIC_MAN_.*" />
Generic like sas_guard1, sas_guard2 etc. need some character to have a voice. A set of GENERIC CHARACTERS (GENERIC_GUARD1, GENERIC_GUARD2) were created for this purpose. There is always higher number of generic souls than generic characters. This operations assigns any character that fits the regular expression.

Assigns a hobby with specified priority to the soul. The name attribute value is taken from hobby_pretty_name column from DB table hobby

setUiName
<setiName ID="1" />
<setiName name="bandit" />
Overrides NPC’s UI name by setting it to a string from the DB table “soul_ui_name”. Normally the UI name of a NPC is determined by character.