This tutorial shows all the main steps you need to follow to create a cubemap for Skyrim (the cubemap you create here may be used in other games, too). 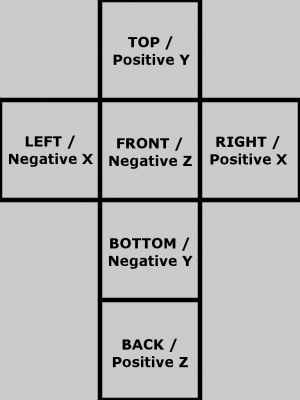 Vertical cross cubemap
Cubemaps are the texture files that are used on metallic items (like weapons and armours) to add reflections to them. In Skyrim they are usually named with the _e.dds extension.

The strength of the reflection in game is modulated by:

The name cubemap comes from the fact that these textures have the shape of an unfolded cube: they consist of six square images of the same size that will cover the six faces of a cube with a seamless picture. There are several shapes for cubemaps (as there are several ways in which you can unfold a cube), the one I am going to use in ths tutorial is the vertical cross shape as shown in picture Vertical cross cubemap.

The most common way of creating a cubemap is using a picture of a landscape, as this landscape will be the image reflected on the item, but you can create cubemaps also using just abstract images with dark and light spots. 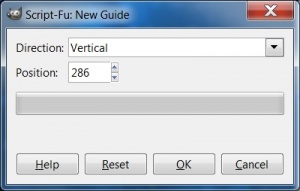 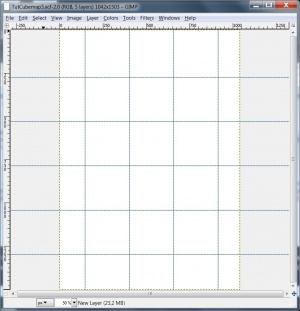 Initial picture
Begin with a blank image in GIMP, the size of it to be a little bigger than the cubemap you are going to use. In this tutorial I am going to work with faces of 256 x 256 and the vertical cross shape, so the total size of my cubemap will be:

A very useful thing to do is to set a grid in GIMP using guides. These guides will mark the edges of each of the six faces that form the cubemap. To make sure that the spacing between them is exactly the size you've chosen for your square faces (256 in this tutorial), select the menu Image -> Guides -> New Guide ... and then select if the new guide is horizontal or vertical and its position in pixels as shown in picture Adding a vertical guide.

After you've added all the required guides, you'll end up with something similar to the image shown in picture Grid.

The next step is to select the base image that will be used for the cubemap, or draw it yourself.

Note: If you decide to draw the picture yourself to make things easier, make sure that all the edges have the same colour and paint the light spots without modifying the edges. That will save you a lot of time.

In this tutorial I've chosen a picture of the Milky Way but it could be any other picture. Open the picture as a new layer (File -> Open as layers ...) and position/resize/rotate it until you get something like the Initial picture. 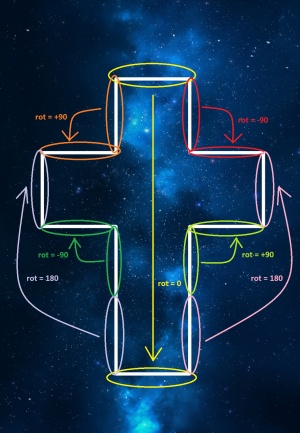 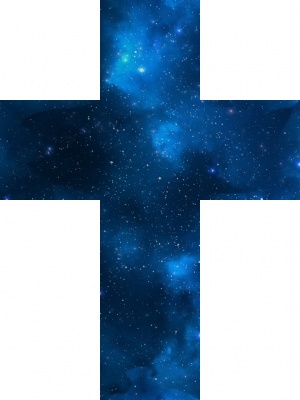 Seamless cubemap
As previously said, the cubemap id formed by six images that correspond to the six faces of a cube. For it to reflect the light correctly, the cubemap has to be seamless, i.e. the edges where two faces will be joined when folding the cubemap on a cube should show a continuous picture. Depending on the picture you've chosen and where you've decided to set the limits of the cube map this task can be very difficult and tedious, so take this in mind when chosing the base image and deciding which portion of it you want to use for the cubemap.

In picture Seams it is shown what edges will be joined together when folded on to the cube and the rotations (expressed in degrees) each of the edges will undergo when joining the corresponding edge of the other face.

I am going to explain the easiest way of making the edges join seamlessly working with one of the edges: the same procedure has to be done for making all the other six edges match, i.e. you wil have to repeat this seven times. The edges I am going to work with are the ones circled by a pink ellipse in picture Seams, the BACK and the RIGHT squares. Picture Eliminating seams shows the process followed:

Notes:
* The easiest way for me to do this is to work with Layer Masks, making transparent some regions of the layer and see the effects and be able to revert them before making them real, but you can use any method you prefer: erase, clone, paint, ...
* Take into account that in the RIGHT square you are going to work with the three outer edges, and that once you've fixed one of them you don't want to generate new seams when working with the other two.

After working on all the edges following the same procedure described above and erasing the parts of the image that are outside the cubemap I got a picture like the one shown in picture Seamless cubemap. Save the picture as a .png file.

Saving the cubemap for Skyrim 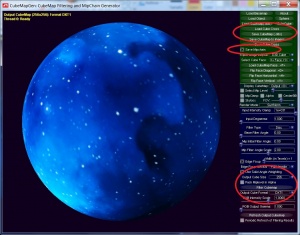 Saving the dds file
The last step is to save the cubemap dds file. You can do that with GIMP but the process is much easier if you use ATI CubeMapGen.

Launch the CubeGenMap and click on the Load Cube Cross button.

Now you have a new cubemap that can be used in Skyrim to add new reflections to weapons, armour or any metallic object in game :)