You can create character animations from scratch or using existing animations and modifying them. The second approach is easier because you don't need to worry about things like setting the bone priorities becuase they will be already set in the animation you use as a starting point. This tutorial will explain the main steps involved in this second approach.

In addition to this, in this tutorial I am going to explain how to replace an existing animation with the one we are going to modify, so you won't need the Construction Set or the GECK.

I wrote this tutorial for Oblivion but it works for Fallout 3 as well.

The main steps are:

Import an existing animation into Blender 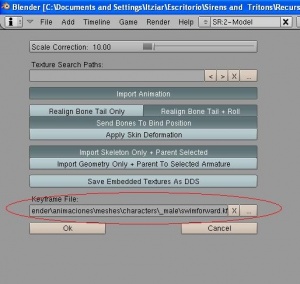 Choose an existing animation from the game that is similar to the one you want to create, and then import it into Blender following this steps:

Now you will have in Blender the skeleton and the animation you've imported.

You can also import a body to see much better how the animation moves the body than if working only with the skeleton. To do this you will have to import the body parts also:

Modify the direction of movement in Blender 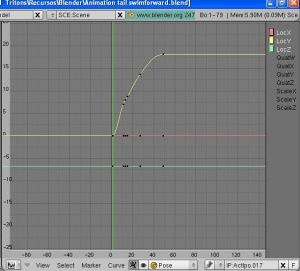 Until now, when importing into Blender animations with movement (like animations for walking, swimming, running, etc), you have to modify the direction of movement or the animation will move sideways. It is possible that this bug will be fixed in future versions of NifScripts. When this is the case, you will be able to skip this step.

Once you have imported the animation into Blender, press the keys Alt+A to play it. You'll see that it moves sideways instead of forward. Luckily it is not difficult to fix this as it affects only one bone (Bip01) and working with IPO curves makes it quite easy.

Once you've done this, the animation will move forward. You can check it by pressing Alt+A to play the animation.

Modify the length and sound associated to the animation

Any changes you make to this animation buffer will be exported together with your animation. You don't have to save the anim file as a txt file.

You can also modify the animation using the IPO curves we used previously to fix the direction of movement.

Tip: If you are creating an animation that will loop several times in game, make your animation one frame longer in Blender than in the kf file. In the example, the exported animation will have 49 frames, so made it in Blender 50 frames long.
Then, copy the frame 1 into the last frame (in the example, copy frame 1 into frame 50), and don't set the position of the bones for the frames before the last (in the example, don't set positions for the bones for frames 49, 48, etc). This way, when the animation plays in game you will see a smooth transition from the end of one loop to the beginning of the next loop.

Export the animation as a kf file

To export the animation:

Give the finishing touches in NifSkope 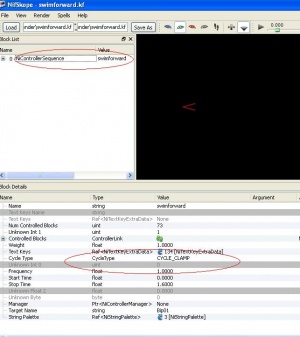 You will have to modify two values in NifSkope:

Once you've modified these values, save the kf file with the same name than the file of the original animation and copy it into the \Data\meshes\characters\_male\ folder. Now in your game, you'll see your animation playing instead of the original one.