This tutorial will explain how to quickly and easily create basic and low poly clothes in Blender using the Shrinkwrap modifier. This technique can also be used to create low poly meshes that have the same shape than high poly meshes.

This tutorial assumes that you have a basic knowledge of Blender. If that is not the case I recommend you to read and practice with these tutorials Blender 3D: Noob to Pro

The steps involved in the process are:

Import the body and add a cube

To create basic clothes using this technique first import into Blender the body you want to create the clothes for.

Use the Mirror modifier

Cutting half of the cube

We are going to use the Mirror modifier that will allow us to work only on onw half of the mesh, replicating the changes symmetrically to the other half of the mesh. To do this:

Subdivide and extrude the cube 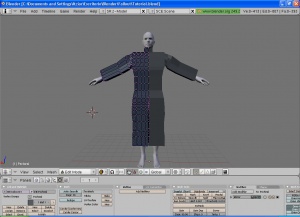 Subdividing and extruding the cube

In Edit mode subdivide and extrude the cube giving it a rough shape that covers the body. Make sure that all vertices are outside the body, but don't care too much about the shape of the mesh as this will be fixed by the Shrinkwrap modifier. You can use any option to subdivide the cube, but I find that the loop subdivide is the one that works best here.

You can extrude the cube to cover the arms (to create sleeves), and the legs (to create trousers) as shown in picture Subdividing and extruding the cube.

Once you have a rough shape of the clothes, do the following:

At this point you can subdivide your mesh a little more, extrude parts of it or move some of the vertices, until you get the shape you want. Or apply another modifier like subsurf to smooth the look of the clothes as shown in picture Adding the Subsurf modifier.

Freeze the shape of the clothes

Once you are happy with the results, freeze the shape of your clothes. Take into account that once you freeze the shape you won't be able to go back again so it is advisable that you save what you've done in a Blender file as a backup and work on a new copy.

Apply the modifiers to freeze the shape of your clothes by clicking on the Apply button that is at the right of each of the modifiers. Apply first the Mirror modifier and then the Shrinkwrap modifier.

From here you can work on the basic clothes you've created as you would do with any other object in Blender (reduce polygons, assign weights, add materials, etc) and then export it as a nif file to use it in your game. You can also use them as the starting point for creating more elaborate clothes.